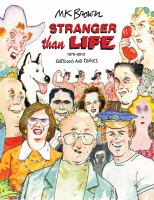 Description
One of the funniest cartoonists of the last four decades, M.K. Brown has accumulated a body of work long savored by aficionados but never comprehensively collected ― until now. Stranger Than Life is the first retrospective collection of Brown's cartoons and comic strips from the National Lampoon from 1972-1981, as well as such other magazines as Mother Jones, The New Yorker, Atlantic Monthly, and Playboy; and her comics from underground publications like Arcade, Wimmin's Comics, Young Lust, and Twisted Sisters. In these pages: Read instructions for the use of glue, making a pair of pants, home auto repair, coping with chainsaw massacres, and jackknifing your big rig. Travel the globe to witness the giant bananas of Maui, strange sightings in Guatemala, camel races, and a "Saga of the Frozen North." Learn about love 'round the world, among eccentric suburbanites, and in a "Condensed Gothic" romance. Meet Virginia Spears Ngodátu, who (with a bit of a name change) would go on to star in "Dr. Janice N! Godatu," Brown's series of animated shorts that appeared on The Tracy Ullman Show alongside the first incarnation of The Simpsons. Aliens, old people, pilgrims, mermen, monitor lizards, tiny floating muggers and other weirdos feature in Brown's side-splitting single-panel gag strips. Brown's cartoons combine a penchant for the absurd with the gimlet observational eye of Roz Chast. Brown satirizes suburban anxiety and ennui by turning it upside-down and sideways, and her slightly grotesque yet lovable characters are perfectly captured in her restless pen line and delicate jewel-tone watercolors.
Also in This Series