New! Our library catalog now also shows items belonging to our partner libraries in the Marmot Library Network. You can place holds on most items from any library in the network and they will be sent to the Aims Learning Commons for you to check out. 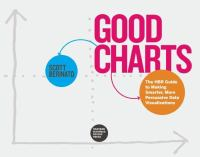 Description
"A good visualization can communicate the nature and potential impact of ideas more powerfully than any other form of communication. For a long time, "dataviz" was left to specialists-data scientists and professional designers. No longer. A new generation of tools and massive amounts of available data make it easy for anyone to create visualizations that communicate ideas far more effectively than generic spreadsheet charts ever could. What's more, building good charts is quickly becoming a need-to-have skill for managers-if you're not doing it, another manager is, and they're getting noticed for it, and getting credit for your company's success. In Good Charts, dataviz maven Scott Berinato provides an essential guide to how visualization works and how to use this new language to impress and persuade. Dataviz is where spreadsheets and word processors were in the early 1980s-on the cusp of changing how we work. Berinato lays out a system for thinking visually and building better charts through a process of talking, sketching, and prototyping. The book goes well beyond proffering a set of static rules for making visualizations and taps into well-established and vanguard research in visual perception and neuroscience, as well as the emerging field of visualization science, to explore why good charts (and bad ones) create "feelings behind our eyes." Along the way, Berinato also includes many engaging vignettes of dataviz pros, illustrating the ideas in practice. Good Charts will help you turn plain, uninspiring charts that merely present information into smart, effective visualizations that powerfully convey ideas. This is your go-to guide for dataviz-the new language of business."--
Also in This Series