New! Our library catalog now also shows items belonging to our partner libraries in the Marmot Library Network. You can place holds on most items from any library in the network and they will be sent to the Aims Learning Commons for you to check out.

The U.S. Navy SEALs: from Vietnam to finding Bin Laden 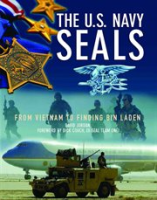 Description
The United States Navy SEAL Teams were only founded as recently as 1962, on the orders of President John F. Kennedy, but they already have a reputation as one of the best special forces units in the world. The US Navy SEALs tells the story behind these SEa, Air, and Land (SEAL) specialists. The book begins with the SEALs' origins in World War II, when the Navy's Underwater Demolition Teams (UDTs) prepared beaches in Normandy and the Pacific for US amphibious landings. The UDTs also served in the Korean War, but afterwards were neglected. A new conflict in Vietnam demanded a new type of unit, and the SEALs were born out of the UDTs as a maritime special operations unit capable of a multitude of missions. The SEALs served with distinction in SouthEast Asia, targeting the Vietcong infrastructure and earning a fearsome reputation. Since the American withdrawal from Vietnam, the SEALs have seen action in Grenada, Panama, the Persian Gulf, Kuwait, Somalia, Bosnia, Afghanistan and Iraq. They carried out the notorious mission that led to the demise of Osama bin Laden. The book describes the full combat record of the SEAL Teams, and details their organization, equipment, uniforms and insignia. Illustrated with black-and-white and color photographs and artworks, and with an authoritative text, The US Navy SEALs is a definitive history of one of America's elite fighting units.
Also in This Series